fill in the blank

is the public program of the *foundationClass.

It is an open space for conversations about positions,

histories and forms of knowledge that are located outside

of the grand narratives.

come together to discuss, unlearn, conspire

or simply to hang out.

weissensee school of art and design 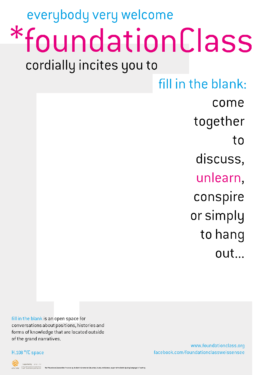 fill in the blank  program:

Self-representation in film based on marginality as a resistant perspective, as bell hooks describes it, can be an empowering answer by People of Color to the hegemonic practice of representation in cinema. Becoming protagonists - and by that subjects - in art production means operating in a politically subversive way within a system of asymmetrical power relations. Which challenges do the directors have to face when deciding to make a subjective documentary film? Is it enough to be subjective in order to challenge power relations creatively? Which role do positionality and standpoint play in this context? Filmmaker Canan Turan will present a sequence from her short film "Kıymet", and parts of her most recent film- and performance project "Balama" (work-in- progress). Starting from both her research in film studis as well as her experience as a filmmaker in Germany and Turkey, Canan Turan will talk about the potential and challenges of subjective documentary, which will be followed by a discussion with the audience.

Canan Turan was born in 1984 in Keşan, the Turkish province of Thrace. She holds a Bachelor in Film Studies, Turkology and Social & Cultural Anthropology from the Freie Universität Berlin, and an M.A. in Screen Documentary from Goldsmiths College, London. Canan´s graduate film Kıymet (2012) was screened at international festivals such as Documentarist Istanbul and screened for the period of one year in the short film program "Canım Kreuzberg" at Moviemento Cinema in Berlin. Canan held lectures and workshops about the so-called German-Turkish cinema at Rosa-Luxemburg foundation, alpha nova kulturwerkstatt, KiJuKuZ Alte Feuerwache and at the Ruberoid Festival in Berlin. Canan Turan worked as assistant director at several film projects („CRIME:BERLIN“ by Jeremy Xido, „Das andere Istanbul“ by Döndü Kılıç, and others) and as creative producer („with Wings and Roots“ by Christina Antonakos-Wallace). She is in charge of the section "Cultural Studies & Film" at the film school Educa Tu Mirada in Barcelona, where she lives and works as a filmmaker, translator and lecturer since 2015.

Exploring Black Joy, Representation and Radical Self Acceptance through Self Inquiry & Contemporary Art

ELLA COOPER is an award winning interdisciplinary artist, photographer, filmmaker, impact producer and community programmer based in Toronto, Canada. Cooper’s creative work explores themes of racialized identity, Canadian diaspora, reclamation, embodied landscapes, ecstatic nudes, contemporary dance and representations of the Black female body in Western visual culture. Her work has been presented in galleries, public spaces, festivals and for broadcast across Canada, with recent/upcoming screenings and exhibitions in Berlin, San Francisco and Los Angeles. She receives continued support from the Canada Council and Ontario Arts Council, as well as being a recipient of a City of Vancouver award, a 2017 Toronto Arts Council Cultural Leader and a recent artist in residence at the Banff Centre for the Arts.

Ella is also known for creating and facilitating transformational leadership and arts equity programs for diverse communities in Canada, US, Jamaica, Europe and South Africa. She is the founder of Black Women Film! Canada, a part-time lecturer at the University of Toronto and has been a featured speaker and guest facilitator for national and international conferences. Ella was recently invited by NYU to speak at the Black Portraitures Conference in Florence, Italy and Open Engagement in Chicago.

2.5. Azin Feizabadi - a collective memory: a story of fire & projection

What form of historiography can embody a 'truth' that is non-scientific and therefore non-ideological? What form of historiography can emancipate the 'event' from becoming fixed, archived and its narrative institutionally instrumentalized? Just like the disputed modern and contemporary history of Iran! Or the absent migration history of Germany! What is the task of the historiographer? How can historiography record and report the essence of an event? How does historiography depend on linear time?
Azin Feizabadi will perform a reading, screen various archival clips, play sounds and show images as part of his production & research framework A COLLECTIVE MEMORY (2009 – ongoing) to discuss the above questions.

Azin Feizabadi is a filmmaker and visual artist, living and working in Berlin. He also teaches in the *foundationClass.

Design is frequently understood as a form of “universal theory” of material culture, and such understanding reflects a profound lack of critical ontological and epistemological inquiry. In a South American context, Design for the most part subscribes to a developmentalist paradigm, a set of research and practices inextricably linked to the former colonial and now neoliberal project. Our position as South American researchers living and working in Europe requires us to negotiate not only what is epistemologically acquired, but also what is ontologically imposed. In our individual researchers we tackle these issues in distinct objects of study such as medications and sound apparatuses. Collectively as “A Parede” we propose methods and pedagogies for design to become a language for political literacy. In this lecture we will discuss the development of our researches since 2013, as well as our future endeavours and propositions for decolonising how design is taught and performed.

Luiza Prado de O. Martins and Pedro J S Vieira de Oliveira usually work together as A Parede; their work takes pride on the angry latin american trope, inviting for a decolonisation of design research via engagements with radical pedagogies, gender and sound studies. They are also 2/8ths of the Decolonising Design group.

Many artists and activists see it as their duty to interrogate the constructs of techno-ideologies and resist dominant narratives of oppression. Interestingly, the art world is one of the few spaces left where criticality can still occur, where spaces of un-representation and data-less zones can be explored. Is artivism worth pursuing as a mechanism or is it just a tool that uses media to heighten the public’s consciousness? Through her artistic practice, Amin contemplates strategies and proposes art as a form of interruption. Should we be seeking a ‘revolutionary’ aesthetic?

Heba Y. Amin is an Egyptian visual artist, researcher and lecturer. She is currently a lecturer at Bard College Berlin, is a BGSMSC doctorate fellow at Freie Universität, and a recent resident artist at the Bethanien artist residency program in Berlin. She is the co-founder of the Black Athena Collective, the curator of visual art for the MIZNA journal (US), and curator for the biennial residency program DEFAULT with Ramdom Association (IT). Furthermore, Amin is also one of the artists behind the subversive graffiti action on the set of the television series “Homeland” which received worldwide media attention.Amin has had recent exhibitions at Kalmar Art Museum, FACT Liverpool, La Villette, Kunsthalle Wien, the Museum of Modern Art in Warsaw, the Kunstverein in Hamburg, Camera Austria, Berlin Berlinale and the IV Moscow International Biennale for Young Art. She also has an extensive repertoire in public speaking and has published several works.  Amin is currently represented by Zilberman Gallery in Istanbul and Berlin.

Based on my personal and professional experiences, what I would like to do in this presentation is to focus on the meaning of discursive and cultural platforms as spaces of circulation and connections. I want to draw some parallels between C&, the platform I have been working with as part of the founding team for the last four years and the webseries Polyglot created by the young filmmaker Amelia Umuhire. Like me, both platforms are embedded in Berlin, in a German and Afro-European context. I will not give a full analysis of each platform. Instead, what I seek to do is to look into their various practices of representation and knowledge production. Through the relation between form and content, both platforms can be considered to act as strategies and visions of deconstruction, affirmation and agency.

Of Guinean, francophone parentage, Aicha Diallo was born and grew up in Berlin. Diallo is a cultural analyst and producer (B.A. in European Studies, Queen Mary University of London), and an educationist (M.A. in Intercultural Education, Freie Universitat/Free University, Berlin). As a founding member and project director of Label Noir, a Black German theatre platform, Diallo was also one of the actors on stage. She has worked for the cultural platform Chimurenga in Cape Town, the art project pret-a-partager organized by the ifa (German Institute for Foreign Cultural Relations) which included the co-curation of the international symposium Where We Meet: Cultural Translation and Art in Social Transformation focusing on African art practitioners. Moreover, Diallo curated and edited the Heinrich Boll Foundation’s online dossier The Living Archive: kulturelle Produktionen und Raume (The Living Archive: Cultural Productions and Spaces). As associate editor of Contemporary And (C&), an international platform for diverse and critical insights into contemporary African art, Diallo has been part of the platform’s founding team since 2012. In addition, Diallo is a joint program director of KontextSchule (Context School) focusing on art education through the lens of critical diversity, empowerment and intersectionality, a training program affiliated with the UdK (University of the Arts, Berlin) in the department Art in Context. Her work and focus areas are situated in the nexus of education, empowerment through cultural production and digital communication.

What feminine part of yourself did you have to destroy in order to survive in this world? At what point does femininity become synonymous with apology? Who hurt the people who hurt you? Alok Vaid-Menon is trying to figure it out. Join them for an evening of poetry, stand-up comedy, drag, and more as they take their audience on an emotional roller coaster all the way from the personal to the political.

ALOK VAID-MENON (they/them) is a performance artist, writer, educator, and entertainer. For the past decade Alok has worked with feminist, queer, and trans movements across the world. Their eclectic sense of style, political humor, and poetic challenge to the gender binary have been internationally renowned. Alok’s work has been featured by HBO, MTV, National Geographic, The Guardian, The New Yorker, and more.

In the work of American artist, Rajkamal Kahlon, we witness an autopsy, a dissection of the visual legacies of empire. The body -injured and transformed -is a reoccurring motif throughout Kahlon’s work. Her interdisciplinary practice questions the formal and conceptual limits of painting, photography and sculpture. Drawing on history, archives and literature, her research undergoes a process of creative transformation resulting in sensual, formally rigorous work.

Manaf Halbouni, dares to “break out of the golden cage“ with his art and takes up current sociopolitical topics in his work, an artistic confrontation that is frequently biographically motivated. With his work he tries to create a social debate and bring people to talk to each other.

Manaf Halbouni born in Damascus, lives and works in Dresden